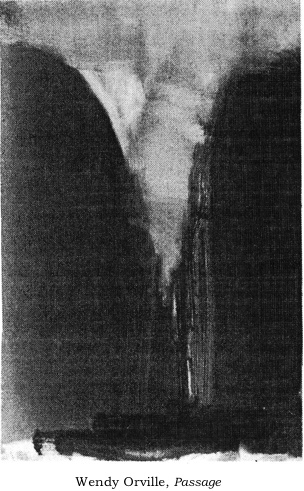 With each successive exhibition, the Barber Shop Gallery in Rancho de Taos gently but insidiously undermines the tourist-targeted, postcard-aesthetic zeitgeist that pervades this fawning “art colony.” The work presented by director/owner Wes Mills (himself a fine artist) in this tiny dissolving adobe, located just north of the, tchotchka shops sacrilegiously hugging the buttresses of San Francisco de Assis Church, restates the obvious: you don’t need track lighting or three-color invitations to search out and present gratifying artistic efforts.

This time it’s the gritty, raku ceramics of Marc Baseman, and the monoprint landscapes of Wendy Orville, two of the new wave of refreshing young artists ( neither is over thirty) who have arrived in Taos in the past several years. Baseman divides his time almost equally between painting and drawing and work in clay, and has several ceramic temple box constructions in this show. His small “temples” refer directly to Oriental models as they achieve a monumental aspect. The primitive, yet oddly ornate architectural works can be taken apart to reveal boxes-within boxes and the vessel-like nature of the objects.

While ostensibly non-objective, Orville’s monoprints are landscapes inspired by the natural world. The thirteen prints have an aqueous, airy tone in pleasing contrast to the stark, arid vistas of the Southwest. The quick, loose energy of the monoprint process is present, but so is a natural, unassuming placidity.

Each artist has presented separate pleasures, but the combination of contrasting elements—earth and fire, air and water—is particularly apposite and again make for a show whose achievement far outreaches its humble intention and presentation.